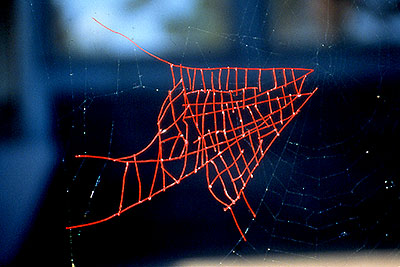 ("Author's cut" of a review originally published in Artforum, Summer 1999)

Nina Katchadourian's recent work, documented in photographs and videotapes, consists of trivial or inept "repairs" to flora and fauna, suggesting the efforts of a clueless amateur field biologist. In Renovated Mushroom (Tip-Top Tire Rubber Patch Kit) (all works 1998), the naturally occurring cracks on mushroom surfaces have been fixed with multicolored tire patches, converting the caps into ridiculous-looking polka-dotted tuffets; in Transplant, a plant's missing leaves have been replaced with membranous insect wings, restoring its symmetry but turning it into a part-animal, part-vegetable monstrosity. Combining the callous experimentation of H. G. Wells's Dr. Moreau with the suburban puttering of Martha Stewart, these projects also send up Andy Goldsworthy's intricate arrangements of rocks and leaves in arcadian settings, which use shamanistic ritual as a pretext for lush photographic set-ups.

Especially reminiscent of Goldsworthy was the "Mended Spiderweb" series, for which Katchadourian sought to restore incomplete areas of large outdoor webs (these were often not the result of any damage but simply gaps in the overall pattern left by the spiders for their own mysterious reasons). Using tweezers and glue, she introduced individual strands of starched bright red thread into a web. The resulting crisscrosses of thick red lines loosely continue the web's pattern, but the photographs make clear that what began as links between interrupted strands often took on lives of their own, seeming to float in the air as "drawings"--semi-abstract, Paul Klee-like pictograms. Mended Spiderweb #8 (Fish-Shaped Patch) really does look like a fish, and certain breaks in the web's network of strands were obviously left "unmended" so that these contours might be retained. Mended Spiderweb #19 (Laundry Line), with its glowing arc of hieroglyphics spanning two webs, features more instances of selective repair. Hovering in gossamer filaments, these thread works are a fragile pas de deux of human and natural effort, so compelling they almost don't need their tongue-in-cheek backstory of "web repair."

Whether one sees them as ironic gestures or exquisite drawings in their own right, the works in this series are tactless invasions of the spider's domain, a fact that Katchadourian readily admits in an accompanying catalogue essay. "I often caused further damage," she writes, "when the tweezers got tangled in the web or when my hands brushed up against it by accident." And while we normally don't know how nature feels about human attempts to "help" it, Katchadourian got immediate feedback. The morning after she made her first patch, she found the threads lying on the ground and realized to her surprise that the spider had pitched them out of the web during the night, like a body rejecting a transplant. This continued to happen with subsequent "repair" jobs, and she eventually succeeded in capturing the rejection process on tape. In the ten-minute video GIFT/GIFT, the viewer watches in amusement as a spider scurries around its web, removing threads as quickly as the artist inserts them. If one sees Katchadourian's project as a kind of New Age-y drawing, then the arachnids become happy collaborators in a cycle of creating and wiping the slate clean; if you take the work ironically, they're environmental "victims" who don't need the help, thanks. It all depends on how you spin it.

back to criticism / weblog